When Kathy and I decided to get married, the first question was where to have the event. We met each other through kiting and landsailing, so it was only logical to have a wedding along one of those themes. We decided to have it at Playas, NM. It took a few phone calls to arrange a minister who would be willing to drive 60 miles into the desert to perform the wedding.

Kathy and I decided to go all out on wedding attire; she ordered tux and wedding dress t-shirts out of a catalog. The plan was falling into place until I asked Dennis to be my best man, he agreed but told me he was going to wear his suit instead of a tux shirt. I told him wear whatever he wanted, just remember, we would be in the desert. Kathy asked his wife Connie to be her maid of honor. 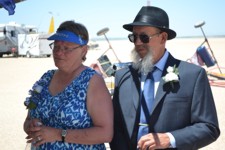 Special thanks go to Randy, who got handed a camera minutes before the ceremony and volunteered to be our photographer. I told him to shoot as many pictures as he could; he did a great job!

Dave agreed to be the "limo" driver, bringing Kathy to the ceremony on the tandem landsailer. He also escorted her to the altar. 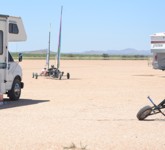 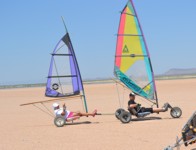 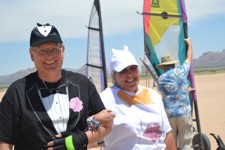 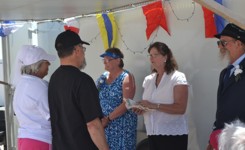